We’ve been doing a fair bit of yoga recently, which along with our own personal, physical niggles, has gotten us to thinking seriously about recovery, and moreover what happens when you sustain an injury that puts you out of action for an extended period of time?

Our good friend and all-round sporting badass, Stacey Coffin, recently had to deal with just that. We asked her to share her experience of  tearing her anterior cruciate ligament earlier this year,  how she’s dealing with it and what advice she has for anyone going through something similar.

Stacey
When my boyfriend and I were sitting on the couch a few days into January and began talking about our goals and resolutions for the year, tearing my right knee’s anterior cruciate ligament (ACL) 4 weeks later did not fit into the plan. I play a fair amount of sport, mainly touch rugby 4-5 times per week, which is not a sport you are likely to manage without an ACL.

ACL reconstruction surgery involves taking tendons from somewhere else (in my case, my hamstring) to use as a graft to reconstruct the ligament, with a recovery period of approximately 8 to 12 months.  I can skip through the first 2 or 3 days post-surgery – I spent the majority of this time either in a fair amount of pain, asleep, or with my head in a bucket. It turns out I don’t handle general anaesthetic very well. Fortunately, these initial unpleasant few days passed quickly, helped by the fact my mother flew over from Canada for the first week and took very good care of me!

I would like to think I was in fairly high spirits during weeks 1 and 2 post surgery, all things considered. I was quite immobile, I thought I might scratch my leg off, my knee was so itchy under the bandages, and I was basically not allowed to leave the house, but the surgery had gone well, I managed to get rid of crutches after only about 10 days, and was progressing through the very basic rehab exercises on track. It wasn’t until the end of week 2, when I was becoming more mobile, that the FOMO started to kick in and I had a few more moments of frustration and grumpiness than normal.

I’ve tried to stay involved with my sports teams by going along to support at the occasional game or training, but it’s also been important not to torture myself at these things when I can’t participate, and to spend time prioritising rehab and taking it easy on my knee. Fortunately, my physios and doctors made sure my expectations were very clear pre-surgery in terms of the work I would need to put into rehab. Part of this was knowing what my recovery goals are, which are 100% to get back to playing competitive sport. I’m aware that this will require a lot of work, likely for the next two years, but if I wasn’t willing to put in the work, there would have been no point in having the surgery.

The most difficult thing to prepare for, and what I don’t think I was quite ready for, is the effect this whole process would have on me mentally. You don’t realise what a release sport is – the opportunity to completely take your mind off work and anything else you have going on and work off some stress – until you can’t do it anymore. I can’t get over how much this has affected my mood and my ability to focus on other things, especially work. I go through a bit of a cycle where I have a physio session that I find very motivating because I’m making progress and I get new exercises to try and then I find myself relapsing into a ‘woe is me’ type attitude as the week goes on, and I miss out on things. Long story short, being stuck in the house makes me very grumpy! I’m trying my best to get past this, focus on physio and spend time on other things, especially as physio sessions start to spread out to more than a week apart…

I’ve also realised two key things from my teammates during this process. First, it’s nice to have friends who have or are currently going through the same or similar process to you. Despite wishing you had both avoided the injury, at least there is a friend who doesn’t get tired of talking about the recovery with you! Second, having a few friends who are physios is awesome. Not that I’m scrounging free treatments from all of them, but I do very much appreciate their willingness to answer my infinite number of questions!

After all of this, my number one piece of advice to anyone having surgery (this may sound obvious and really, it is, I’m just an idiot): do not google “what will my _____ scar look like”. The image results will not be pretty. And they’re almost guaranteed to be the worst-case scenario. For example, this is one of the results I got: 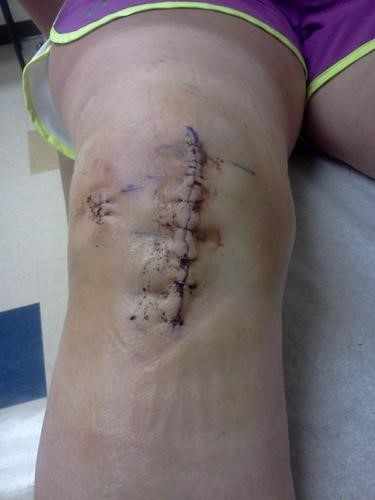 And, of course, this is then what I had in my head my knee was going to look like for the rest of my life. I’m being a bit dramatic there, but I was honestly a bit stressed about it. So, on day 11 when they took the bandages off, I was pleasantly surprised to find this:

In my head, when I imagined this process, I obviously considered the things that could go wrong as I’d been warned about them, but in that way that we’re aware of risks and things that could happen yet we all still think we’re invincible and it won’t happen to us (ironic really, considering the topic of this post), I just assumed that my recovery would go completely to plan and follow the shortest timelines possible. That hasn’t quite been the case, and really, I did know that it was unlikely the entire rehab process would go to plan. My recovery started off well with my knee improving week to week. However, I have had a few setbacks in that I’ve now re-torn my hamstring, where my graft was taken, twice. This has not only been painful, annoying, and affected my ability to do my rehab, it’s also affected my motivation to do my rehab. A motivation that can be hard to maintain anyway when the first phase of rehab involves quite monotonous exercises. But, as I approach week 8 of recovery, my knee seems to be getting back on track and I’m beginning to be able to incorporate slightly more challenging work into my rehab. I’m just hoping it continues on a better path from here!

Thanks a million for this piece, Stacey – wishing you a speedy recovery! You can follow Stace and her various sporting adventures on Instagram @Staceycoffin