I love tyre flipping. I also love how ‘flipping tyres’ can be used in exasperation if you are easily amused by rubbish puns (it’s the same as ‘rucking shields’ which is a long-running joke in my family…..) I also love sledge dragging, lifting heavy stuff and chucking battle ropes around. Oh and obviously being told I’m alright at it. Which means that, after coming across City Strongman on Twitter and remembering how much I used to love ‘Torture Club’ (aka circuits at the rugby club) I was clamouring to give it a go.

City Strongman was set up by PTs Dave Thomas and Ben Gotting and started out at Rosslyn Park on Saturday mornings. They’ve just started expanding due to a being a MASSIVE success and now hold a mid-week session at the Iron Club, tucked away under the arches by Vauxhall station. So I rocked up, not 100% sure what I was letting myself in for – but with a decent idea of what it would entail having watched some of the promo videos. There were probably around 15 of us – with a healthy smattering of girls which was great to see. It was a mix of people who had been there previously and people who were maybe a tad apprehensive…

We started with a warm-up outside, including a lot of dynamic movements to mobilise the joints. FYI- I’m a massive advocate (and there is shed loads of research on the biomechanics and energy transfer aspect) of dynamic stretching – especially for power based activities. It’s something I always get running groups to do and people are often curious as to why it is more effective that static stretching – I’ll do this in more detail in another post, but the long and short of it is that it helps to better maintain and transfer energy within the muscles, which is ideal for movements requiring a lot of power (think jumping, bounding, lifting….)

It was a perfect evening for being outside – and after a lot of lunging, squatting (jump squats and squat holds ALREADY made me aware of a few recent gym sessions and frankly, making me worry about how the rest was going to pan out!) we split into two groups with half the group staying outside and half moving back into the gym.

My group were outside first and ran through two laps of a circuit – battle ropes, farmers walks, shuttle sprints and tyre-hitting-with-sledgehammer. Seriously, if you are storing any pent up aggression from a day in the office, this stuff is ideal. This was interspersed with air squats and press ups (press ups become SUPER hard after the sledgehammer aspect)

After a couple of rounds , the groups switch over. Inside was flipping tyres (YAY), deadlifts, clean and press and 100kg sledge dragging. There is a big emphasis on pair work and motivating the rest of the group – and it’s awesome when someone surprises themself and manages to do what they weren’t expecting. There are limited rests, making it that bit more challenging and the full body movements means that there is no stone (tyre?) left unturned.

Again, two rounds and we reconvened outside for a bit of a medley with the two groups together – tyre flipping, farmers walks and more sledge dragging. Again, everyone was still in great moods and really making sure everyone pushed each other.

One thing that is not a big thing, but I definitely noticed it – there were different weight options for some of the stations but there was never any hint of “girls, you should do the lighter one”. It was much more a “there are two options, I reckon some of you can do the heavier one”.  And that is a massive plus. Because what typically happens here is you either get people like me who would be like ‘well if that one is for girls then I am DEFINITELY going to do the heavier one’, or the opposite end of the spectrum being further intimidation and more thoughts of weights not being for girls. Which is exactly the barrier these guys are trying to break down and doing a pretty decent job of it.

Also, if you are reading this thinking ‘Katie there is no way in hell I am going to do that’ then don’t be afraid. Both Dave and Ben are fairly adept at noticing when you are either struggling – in which case they will lend a hand – or, if you clearly could do the heavier weight but just avoided it……(ahem, farmer’s walks for me). There is a big emphasis on getting the technique right – it’s not a crossfit style ‘do it as fast as you can’, it’s a ‘do it quickly but don’t wreck yourself doing it’.So if you don’t understand, they’ll keep an eye on you until you do. Which is spot on. 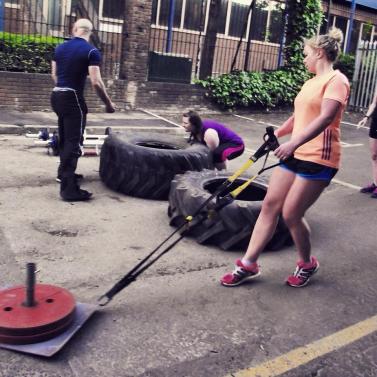 Basically, it was awesome. I was absolutely buzzing afterwards. I was also a tad sore, but that probably is also something to do with the intense kettlebell swinging on Monday evening. And some hill sprints. And some touch. #suckerforpunishment City Strongman is currently at Rosslyn Park at 9.30am on Saturday mornings and The Iron Club on Tuesdays at 7pm. Take a look at the website to sign up here, follow them on Twitter @citystrongman, check out their Instagram….basically stalk them as much as you can and you can’t help but be convinced to give it a go. And return. I’m literally climbing the walls until the tenancy on my new flat starts so I can get myself down on a Saturday morning! 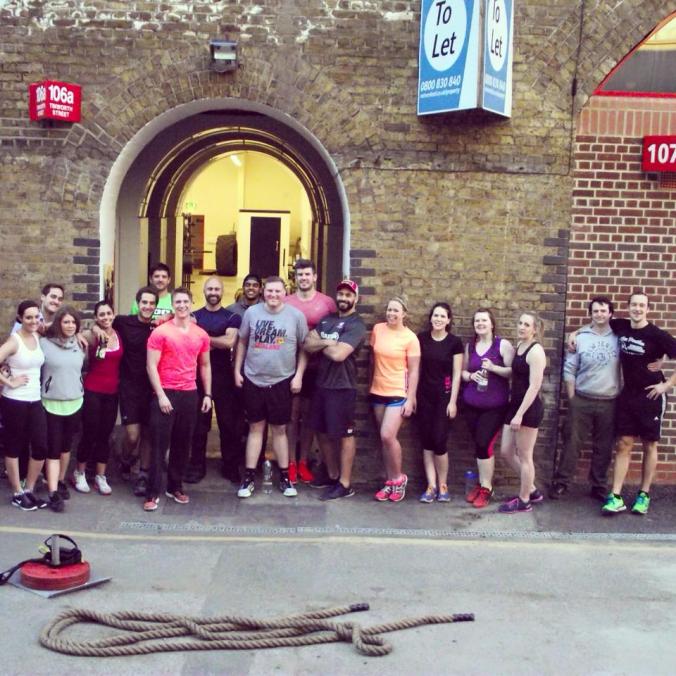