I have to admit, this post has no intention of cleverly satirizing the fad diet by drawing comparisons between burning belly fat and the Cold War… I’m just a massive nerd and have been wanting to crow-bar a blog post into Dr Strangelove’s title for some time. And now I have.

Over the past few weeks, I’ve lost about half a stone in weight (just over 3kgs, for those of you who deal in non-anachronistic units of measurement). I haven’t gone out of my way to do so – I haven’t gone on a calorie controlled diet, or gone mad in the exercise stakes, but I have started blogging. I am almost certain that there is a direct correlation between these facts. 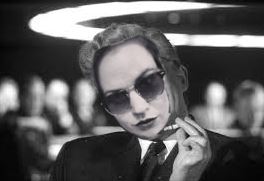 Last year I was lucky enough to be enrolled on the Gazelle Partners Wellbeing programme through work – two lifestyle consultants, Nici and Anna, take a holistic approach to health and wellbeing by assessing all aspects of your health and lifestyle, before creating a programme to improve individual health. One of the things they asked me to do in order to carry out this assessment was to keep a food diary for a week; I had to capture in a notebook every single morsel that passed my lips. By the end of the week I was genuinely surprised by how much more I ate on average every day than I thought I did. I wasn’t counting calories, literally just writing down what food I ate, but in doing so became so much more mindful of the types and amount of food I was consuming.

It is this simple act of writing things down that has encouraged mindfulness in me. There is now a whole host of brilliant apps, websites and wearable technologies out there that can help people track their calories and activity (we’re talking Fitbit, Jawbone, myfitnesspal), but I would like to extol the virtues of the old school pastime of putting pen to paper. Having to sit down and actually think about what you’re writing gives you that little bit more time to consider its impact – rather than just plugging data into and app and being dazzled by the shiny, shiny graphs that it spits out. I’ve found that even by starting to blog, I have become much more aware and considered of what I eat and how much exercise I do. So rather than mindlessly shoveling in an extra slice of pizza and sitting on my backside of an evening ‘because it’s Thursday’, I now eat a little less and move a little more! The fact that I also share my writings with you lovely people is of course another kick up the proverbial that is most welcome… 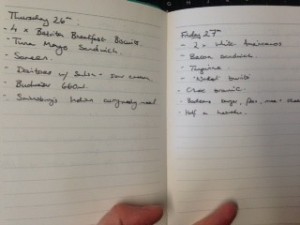 So, if you’re looking to kick start a fitter, svelter you, don’t shell out wads of cash on fancy bracelets or a weight watchers subscription just yet. Why not pick up a cheap and cheerful notebook and take to writing about it? It could be anything from a simple list of food and exercise, to entries outlining how your sporting endeavours made you feel, to a thesis on the virtues of consuming only piccalilli fermented in the perspiration of an infant chimp after 6pm, as long as it makes you sit down for a few minutes to fully consider your diet and exercise that day or week. Why not go the whole hog and blog or tweet about it? That way your followers will hold you to account too!

Does anyone else have any useful hints or tips for being more mindful about diet and exercise? We’d love to hear about them!