So I wrote last week about being stuck in a rut and how I was hoping that a little trip away with my running crew might do the trick.

We decided over a post parkrun brunch a few months ago that we should follow in the footsteps of Mo, Paula et al and give altitude training a go where the best of them train – Font Romeu in the French Pyrenees.

We flew to Toulouse, rented cars and headed up to an airbnb in Saillagouse, a few miles away from Font Romeu. By the time we arrived it was gone 2am, so we quickly shotgunned beds and headed to sleep.

The house we rented had the most AMAZING shutters on every window. Meaning that, despite the long drive, I woke at 9.30 thinking that it was still the middle of the night! We wandered down to the boulangerie to explore the village, returning with armfuls of almond pain au chocolats and begun the bread binge…(a repetitive feature of the trip) and headed down to the pool…and stayed there.

In the afternoon, we finally dragged ourselves off  the piles of outdoor cushions and drove up past Mont Louis, stopping at a parking spot just off the main road (by the déchèterie if you want the precise location) and headed out onto the trails. People aimed for a variety of distances – we had spotted an 8k loop but we never really found it, instead ending up with an out and back through forest, across fields and along track, totally about 6 miles, hitting the dizzying heights of 1800m altitude. 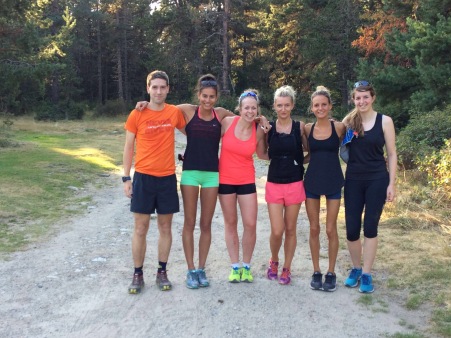 Bang on 6 miles with an average pace of 9.04. Wrapped it up with a few planks and stretchning, before heading back to chicken and roasted vegetables. And obviously bread.

On the subject of altitude – I don’t think it made a huge amount of difference in terms of feeling impossible. Things felt marginally harder – mainly I noticed my breathing feeling a bit more laboured, but that was only when we had got to pretty much 1800m and we were still going on a steady uphill. Fingers crossed I’ve now got 1000000 extra red blood cells without the use of EPO and I will smash a 1 minute parkrun PB at the weekend….I WISH!

By the end of the day, we were ready to crash, and again, I slept brilliantly with the help of the shutters!  We ran to Spain on Saturday morning – well, sort of Spain. Llívia is a Spanish exclave, made so by a technicality in a decree years and years ago with regards to what was handed over to the French.But did a few faster miles out and then a tiny bit of a push for 5 and 6 (made a lot harder by the fact the route there was all downhill and the route back was all uphill…) 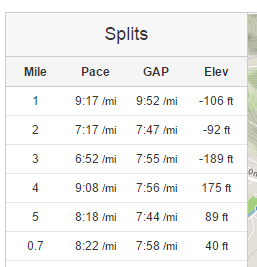 In the afternoon we headed up to Lac de Matemale for a mixture of activities. It’s about a 5 mile loop (10k if you ‘add a bit extra’) all the way round, but I wasn’t in the mood for a run, so walked for a bit and then decided to brave a swim across the edge.Apparently there is a supervised swimming area somewhere but I chose to take a gamble. NOTE – I’m not advising just throwing yourself in a lake. The girls were walking round the lake pretty close by and I stuck to a distance out from the shore that was safe. Advice-giving over.

I mean I basically only swam about 250m but that did the job – cleared my head, got me over my fear of weeds (aka avoided getting tangled up) and got me back in the water properly for the first time in six weeks.

On Sunday, we drove (about 5 minutes) up to Vedrignans, with the aim of doing a LOT of climbing . Unfortunately, after about 2 miles, I knew my niggly calf wasn’t going to cut i so I headed down again, varying my route to meander through a field of hay bales and through the sleepy town of Err before looping back up to the car, leaving the rest of the guys to do their thang and go up up and up! Which they did. With various experiences such as gorse bushes, cows and galloping horses. But all came back alive.

On Monday, I headed off with the rest of the group, but to be honest, I fancied a run by myself. I wasn’t sure how my calf would hold out and I was quite happy to have a bit of a potter and explore a few unknown routes with only my own thoughts for company.

And what lovely places I found! Took a guess at a route, which went up and up (as I expected), but got to a point where I thought I should probably turn round…however when I got back the others were still out, so I totally would have had the time to add on a few extra 000ms to my climb over about 2k! The trails were dead quiet which was just what I wanted. I think my quads have just about recovered from the somewhat technical descent…I don’t really think I noticed any impact of altitude on this run, despite the climb – but that’s probably because the climb was hard enough as it is so I was expecting to go slowly and have to take walking breaks! 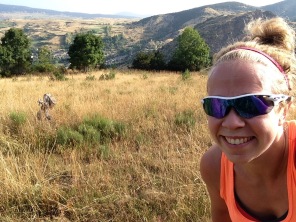 In the afternoon we finally took a trip up to Font Romeu itself to see the hallowed training grounds of the elite. But no track session for me this time. The town was surprisingly quiet, the French children being back at school and the majority of the holidaymakers having gone home. 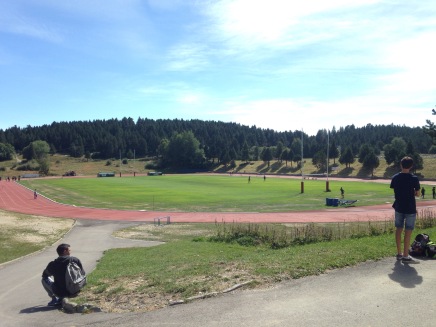 Unfortunately we then had to hotfoot it back to Toulouse airport where our flight was delayed….Ever been in an airport that is practically shutting down around you? And the food is awful? Yep that was us.

All in all, it was a great few days. It made me realise how much I love getting out onto the trails – and how much I needed a few days to reset my brain, recharge my batteries and get my mojo back. (I mean I haven’t been for a run since, but it’s only been a couple of days right?) We’re already planning 2017!

Ever been training at altitude or on a running holiday?

Footnote – key things I learnt from my holiday:

3 thoughts on “Altitude training in the Pyrenees”