I think this is a first for this blog. A actual recipe. We’ve not broached this area before, tending to keep things behind closed kitchen doors and have you all guess what we’re whipping up. But here we go.

Post long run this Sunday I decided that I had some serious cravings, and wanted to make something that made myself feel vaguely better about the fact I would be spending the rest of the day on the sofa with Netflix. And also something that didn’t require several layers of baking and waiting for completion – I’m looking at you, Millionaire’s Shortbread.

Enter these beauties. Gluten-free, flour-free, chocolate-heavy and with a healthy dose of pulses (and a healthy dose of peanut butter, but apparently not everyone would put peanut butter on the list of key components of a balanced diet). Chickpea blondies. Stop rolling your eyes already about the fact chickpeas have gone into a dessert. It’s a thing and you can’t escape it. The fact that I went for gluten-free baking is nothing to do with dietary intolerance, they just taste nice.

(Full credit for this recipe goes to Ambitious Kitchen, and also to my sister for sending it to me months ago) 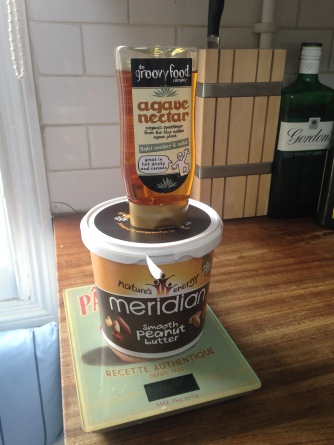 Drain and rinse the chickpeas. I like to peel the chickpeas. This sounds a bit weird and time consuming, and probably isn’t necessary, but I think it makes it smoother. It’s not a tough task, simply squeeze the chickpea gently and the chickpea should ‘pop’ out of its skin. (And potentially onto the floor, but I will let you make up your own 3 second rule) 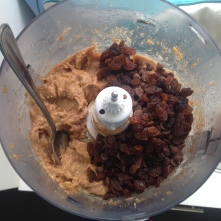 Once you’ve done that, throw the chickpeas and everything else except the chocolate chips and sultanas into a blender. Blend. Keep blending until it’s super smooth. Taste some mixture.

Taste some more. Maybe eat a few spoonfuls. Be amazed at how good chickpeas can taste. Make anyone else in the vicinity also try it (force feed your boyfriend if necessary and then add a ‘I told you so’ when he admits it tastes nice) Stir in the chocolate chips and sultanas with a wooden spoon. Triple check the taste of the mixture before pouring it into the baking tray. 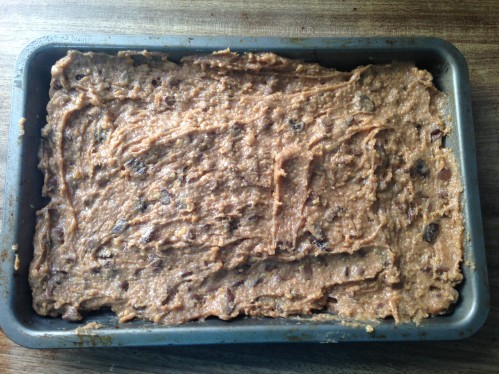 Leave to rest for around 10-15 minutes before slicing and then cooling on a wire rack. Attempt to take slightly better pictures than me. 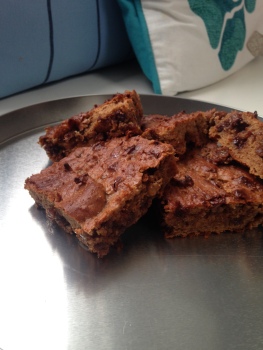 Eat on the sofa accompanied by compression leggings,the One Direction movie and a protein shake. Feel proud of having accomplished something with your day.