Kate & I went on a little jolly last weekend – to Brighton! The girls we play touch with had been flirting with the idea of getting together a 15s team, but quickly realised that finding more than about 10 girls from work to actually play was going to be a tough ask. So it got downsized.. And yours truly, when asked if she wanted to play, responded with a ‘maybe’ which was understood to mean yes. Immediately followed by “AAAAAH OMGOMGOMG I HAVE NEVER PLAYED CONTACT I AM GOING TO BREAK EVERY BONE IN MY BODY AND DIE”.

So yah, there was a lot of panic. However (as you will soon find out), I was basically massively over-reacting and I’d love to try and persuade other girls that it isn’t anywhere near as terrifying as you think it might be. This weekend was the culmination of 2 weeks of stressful events – my first tri, followed by the Chiltern 100 and then potentially getting my face broken à la Georgia Page.

HOWEVER. My face is intact, I have a few bruises but overall I loved it. We had a team entered into the Brighton 7s (website currently being updated) where there are several tiers for the men, but the women’s is a bit of a free for all. This is either great or terrifying, depending on your experience… 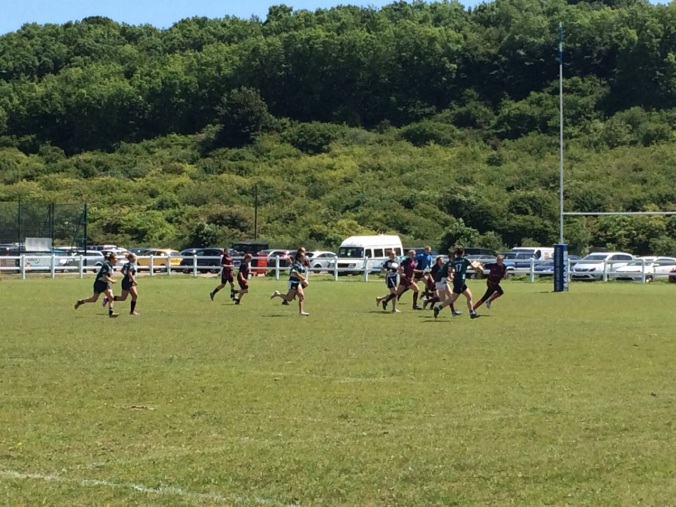 But to sum it up – we lost the first game 14-7 (getting into the swing of things), beat Southampton Uni B team 37-0 (mental, plus I scored a try) and then lost to Richmond 15-5. (I think those scores are approximately right) 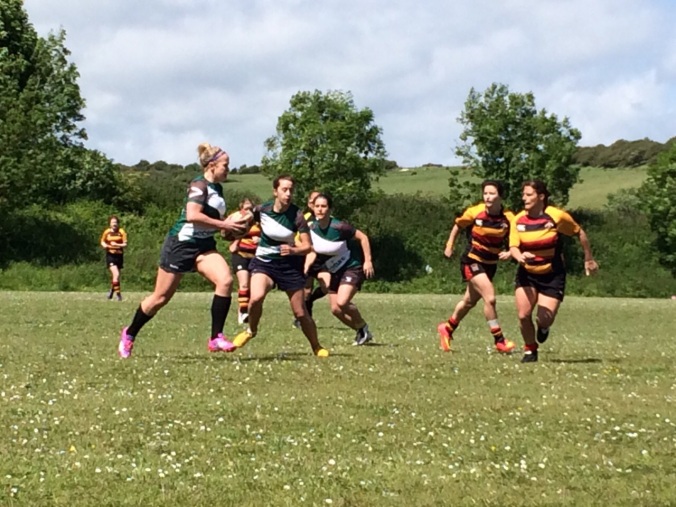 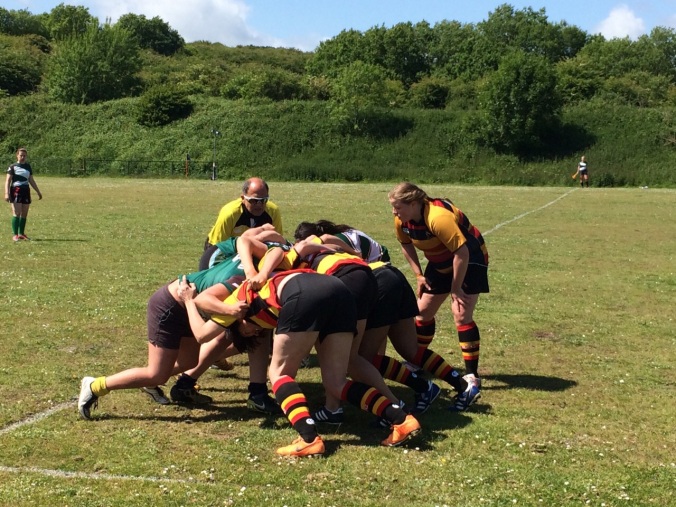 7s is a great way to get into contact – there’s typically less than 15s due to the nature of the game, it doesn’t matter so much if you do run the ball around and, if all else fails, this kind of tournament cannot fail to be super fun! It doesn’t actually hurt as much as you think once you get into the swing of it (until you discover the bruises the next day) and if you’re competitive and fancy a challenge…well you will get right into it and won’t think for a second about tackling people bigger than you, as once you get over it happening the first time, you will be totally down with it.

Basically, once we realised we hadn’t got out of the group stages, everyone grabbed a pint and sat in the sun to watch the rest of the games. We were staying on site in tents, so had a cheeky night out and then watched some more rugby on the Sunday – dreamy!

Here are some key insights that I gleaned – some are rugby related and some are a vague-attempt-to-be-related-but-happened-over-the-weekend.

1. Men with nosebleeds are very grateful for tampons. Although it will take 3 of them 5 minutes to work out how to get it out of the applicator.

2. If it is a mixed tournament, you will at some point end up on the sidelines with men, watching a women’s game with them making snarky comments as loud as they can to wind you up. If you accidentally laugh, it gets 100 times worse. If you get angry with them, it also makes it worse. They generally don’t mean it. Much.

3. IT DOESN’T HURT AS MUCH AS YOU THINK!

4. Kate O’Connor will argue with you about objectification of men in shorts, especially if you refer to it as ‘just being like admiring a work of art’. Therefore, move nearly out of earshot and continue on as you were.

5. Your dad’s rugby shorts will actually fit you quite well which is worrying. You may however, struggle to get them over your bum. Plus point here is that it means they won’t fall down in the tackle.

6. Lairy boots are still lairy. People will still comment on them. Embrace it.

7. In Brighton, you can go out in a hoodie and still be let into bars. You will however feel like people are judging you. Quite a lot.

8. If you are female and you go to a 7s tournament, you probably have a good ratio. Just sayin’…

9. Running round people to score a try under the posts is a great feeling. Probably never to be repeated again.

10. Getting out of a 2-man tent in an elegant manner is never possible. Especially when your tent becomes a sauna at 8am and you need to get out RIGHT NOW.

11. Talking with a gumshield in is hard. Some people therefore think I should wear one at all times…

12. Haribo and Lucozade are a winning combination.

13. Playing a game with two mini rugby balls will literally occupy you for two hours. Turning it into a drinking game probably has something to do with this.There is an optimal level of gin required to be good at his game.

14. Going into a scrum does not immediately transform your ears into cauliflowers. Who knew?!

15. IT IS FUN. It is not scary once you get going. You will laugh a lot, enjoy it, do the wrong thing, stand in the wrong place, do the right thing, embrace the joy of the tackle, score a try, praise your team mates, shout a lot, cheer a lot…and you will agree to do it again. Willingly. (Also makes a great story on Monday morning)