The sun is finally out and I (and everyone else, don’t lie) am SWEATING a lot. Especially if you are doing any kind of sport. I sacked off track partway through the session last night because a) it was the hardest sessions EVER (6 x 1 mile) and b) it was the hottest day ever.

Now, I obviously know when you sweat, you lose electrolytes and that is a bad thing. You don’t perform as well, you don’t recover as well, you get cramp. That is why companies are constantly peddling electrolyte drinks, vitamin water (I drink it because I like the taste rather than any nutritional benefits), protein coconut water (still tastes as bad as normal coconut water vom) to get you to replace lost salts and minerals.

So that is a form of supplementation – but supplements as a whole, I’ve never really felt the need to delve into…It’s a combination of

Pharma Nord got in contact a few months back to ask if we would like to try out their Bio-Magnesium tablets, and I have to say, I was easily convinced by the claims of magnesium in reducing DOMS and aiding recovery. I rarely feel like I’m not in a state of DOMS (to the point that my legs always hurt walking up stairs.end of) so this was a BRILLIANT way of convincing me.

What role does magnesium play in the body?

Magnesium regulates A LOT of reactions in the body (over 300 enzymatic reactions!), from protein synthesis to blood pressure regulation. It is also probably fairly low in the list of “top things you would think about supplementing” – with iron and sodium tending to be near the top of the list for endurance athletes, but its role must not be ignored.

And a HOST of other things include regulating cardiac muscle function, blood pressure, insulin sensitivity and nerve function

So think about how much more on average you do of the above if you are an endurance (or any kind of) athlete (I may be over-exaggerating my ability right now) More exercise = more energy needed = more magnesium required with rapid delivery. Greater needs for protein synthesis during recovery,  a higher likelihood of an imbalance due to increased sweating (especially if you choose to run track in 28 degree heat) and therefore loss of magnesium and a change in electrolyte balance.

What are the signs of magnesium deficiency?

So, all of the above are things I would typically associate just with training. Never have I ever thought “my legs are really tired, it must be all that magnesium I’m missing”. Nope, I just assume I’m tired and have done a lot (which is also often true). More severe cases of deficiency are marked by changes to heart rhythms, low calcium levels, reduced blood potassium and heightened insulin resistance (which often precedes diabetes)

Where does magnesium naturally occur?

An adult body contains approximately 25 g magnesium, with 50% to 60% present in the bones and most of the rest in soft tissues (1) – so only 1% is actually present in the blood! As far as stores go, this isn’t a vast amount, so it is very much something that needs to come from elsewhere.

Top dietary sources of magnesium are leafy greens, nuts, seeds and lentils – magnesium is found in chlorophyll, so plants are a good place to start! Unfortunately, the amount of magnesium found in the soil has decreased, which has affected the levels naturally occurring in food.

How much magnesium do I need?

The UK RDA (recommended daily allowance) is 270mg for women and 300mg for men.  The Bio-Magnesium tablets contain 200mg per tablet, so I’ve been taking one a day as I think I’m already getting a fair amount from my diet.

The crux of the matter…do they work?!

In the absence of a controlled study, I can’t give you a definitive answer and wouldn’t want to because I’m not qualified to do so. So I’m not sure on the actual science of it.

I’ve been taking a tablet a day over the past month or so and I *think* it’s working. I know that’s not a particularly long test period, but here’s to hoping it will help in the longer run.

I don’t know whether I’m mentally telling myself that there is an impact and it’s therefore a placebo effect, or if it genuinely is (I’m hoping the latter!) However, looking at the RDA, I’m not sure if I would be hitting that every day, despite eating a pretty balanced diet that does contain a lot of the key foods. (Also, looking back at marathon training, the amount of Haribo I consumed probably did not provide adequate magnesium. Another key point to note is that the need I felt for Haribo can actually be a sign of magnesium deficiency…)

The tablets are a tad on the large size, but do dissolve in water. I haven’t actually tried this, preferring to just take them with water as I’m often not a fan of the taste of soluble tabs. Instructions are fairly self-explanatory – 1-2 tablets a day (I’ve just been taking the 1), taken with/after food. 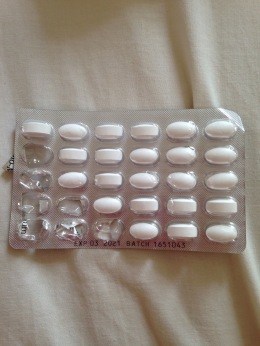 One of the key selling points is the magnesium blend. Magnesium compounds each have different pros and cons (ranging from ease of absorptions to likelihood to cause digestive issues – and digestive issues is a sure sign of too much magnesium!) and the mix of magnesium acetate, carbonate and hydroxide allows the different compounds to complement each other.

The most valuable part of this post for me was reminding myself of exactly how important magnesium was – and also being able to look into some of the research that has taken place since I completed my degree.

Do you supplement? Is magnesium on your mineral radar?

*Disclaimer – I was provided the supplements by Pharma Nord in exchange for a review.  As always, opinions are my own (note, there are scientific facts above…I didn’t make those up) Please consult your doctor or a nutritionist before taking any kind of dietary supplementation*