DISCLAIMER: I’m not a nutritionist, nor do I claim to be – yes I have a vague academic background in it but please take everything I say with a pinch of salt from someone who wrote the majority of this in Chamonix with a raspberry and passionfruit Fanta in one hand and a prawn cracker in the other after eating approx half a cake and 32 gummy crocodiles.

Skiing is a toughie. If you do it properly (yes, you may define this differently to me, but I do not mean getting on the slopes at 11, having a 2 hour lunch and stopping at 3 for après) then you burn through a heck of a lot of calories. I ski hard. I choose to go skiing with people who ski hard and I wouldn’t have it any other way. If I’m going skiing, I want to spend AS MUCH time as I can on the slopes, I want to push myself, ski fast and get out of my comfort zone or I get bored.

So how do you eat enough for the energy you need….whilst being fairly conscious that the typical Alpine meal consists of cheese and bread, cheese and potatoes, or cheese, bread AND potatoes (not that there is anything wrong with that in my mind, but it’s not always slow-release carbs….) I wouldn’t say I’ve mastered it, but I think I’ve got enough experience to give a fairly good perspective of what works and what doesn’t, making sure you’ve got enough energy to power through some 4.30pm slushy moguls AND enjoy the finest that the Alps (or your destination of choice) can offer in culinary delights. 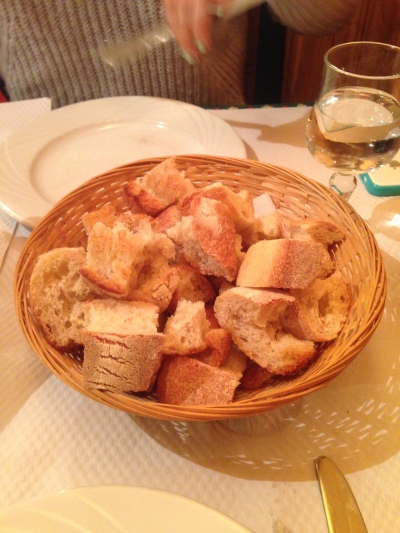 So this was my second trip to Chamonix this year (guilty pleasure) and I’m with my sister and one of my best friends – we’ve rented a self-catered apartment which obviously is a big difference compared to a catered chalet – but I’m used to this. Taking 4 skiing is not the cheapest of holidays, so as a family we’ve generally gone self-catered which gives a lot more flexibility and control over what you put in your mouth!

Apparently skiing can burn 3000 kcal a day (yes I am aware I just used the Daily Mail as a reference….) which is a fairly hefty amount. I think I eat at least 3000 a day when I’m skiing but I don’t actually count them (FYI, hopped on the scales this morning and it’s no change from before skiing so go figure) so let’s take a look at what it’s made up of.

So a typical day – alarm goes off at 7.30 and it’s porridge or cereal for breakfast. Certain people I know use a lot of Nutella in their porridge but hazelnuts are good for you. The girls did eggs a couple of times, but I have made my feelings on eggs very clear…After breakfast, it’s sandwich making time. It’s far cheaper than eating on the mountain and means you can eat anywhere and everywhere, giving you more time to ski!! You can sit at the side of the piste in nice weather, or lots of resorts now have ‘salles hors sacs’ (picnic rooms) where you can shelter from the elements, put your gloves on the radiator and fill up your water bottles! On a side note, Chamonix as a resort didn’t seem to have the lovely mountainside restaurants that the PdS or 3V has, everything is very samey and chainy so I actually didn’t miss it a bit. (This is upsetting though when all the hot chocolate tastes the same rather than being able to scout out the best). 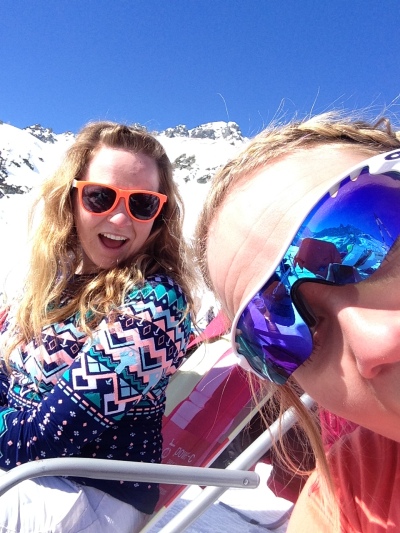 Sandwich of choice this week was ham, Coulommiers, pesto and salad. I’ve tried taking salads in tupperware on the pistes but a) I always broke the plastic fork and b) I felt super sluggish therefore have resorted back to white carbs in their purest form, a baguette. Then, ALWAYS HAVE SNACKS! Dried apricots, cereal bars, miniature heroes, fruit (not bananas as they get ruined), energy gels….the types of thing you’d take on a long bike ride. Always have lots of snacks. Or make sure your mother has them for you. And don’t forget water – you can easily get dehydrated on the slopes as if it’s cold, you don’t feel like you need it as much, but don’t let it fool you – you want to be replacing water you lose in sweat as well as getting your daily intake.

OK, so sandwiches and snacks packed, ideally on piste any time between 8.30 and 9.30 (resort dependent – bus transfers, lift queues etc) but always out the door before 9. Timing eats through the day varies – with the weather, number of jaegerbombs drunk the previous night, how good the snow is, what the weather is doing….but usually it’s either 1) eat lunch just after 12 or 2)stop for a coffee (hot chocolate obviously) around 11 and have lunch at probably half 12 (we get HANGRY!). Eat sandwich, have a snack (typically fruit or a cereal bar) and maybe a bar of Milka between 3. Then ski ski ski ski ski (+ snack eating stops, water breaks, toilet stops, undo-boots-because-I-have-cramp stops) until you can ski no longer. Then stop and have a drink or several, take some selfies and have a snooze before the sun goes down. 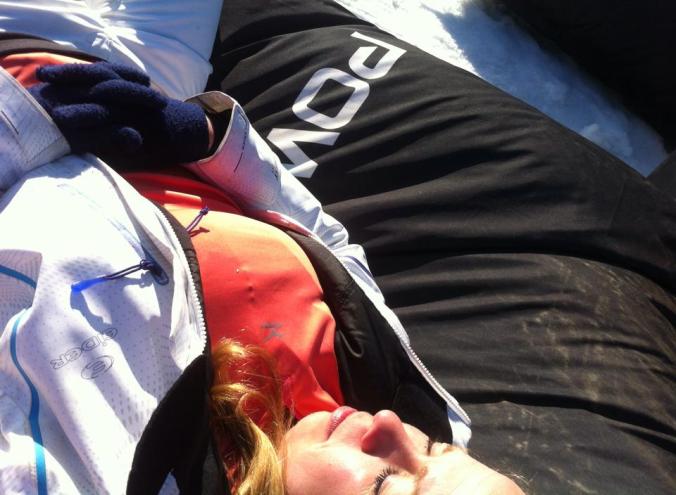 Then the fun begins…you have several options (again, depends on the resort, where you are staying, who you’re with)

Now, I don’t know about you but when I get back from skiing I need to eat ALL THE FOOD and it’s really hard to stop ploughing through everything I can see. I find I really crave salty snacks and fruit doesn’t quit cut it….but hey ho, I’ve earnt it.This is also the same if you are in a catered chalet because there will be cake coming out of your ears.

Then dinner time. If you’re self-catered, you can easily recreate the types of things you have at home. We’ve done burgers, spinach and potatoes, roast chicken, pasta, spinach and pesto, turkey steaks, chilli etc….you might have to get used to a new kitchen where the facilities may be slightly limited, but there’s nothing to stop you cooking a healthy meal! 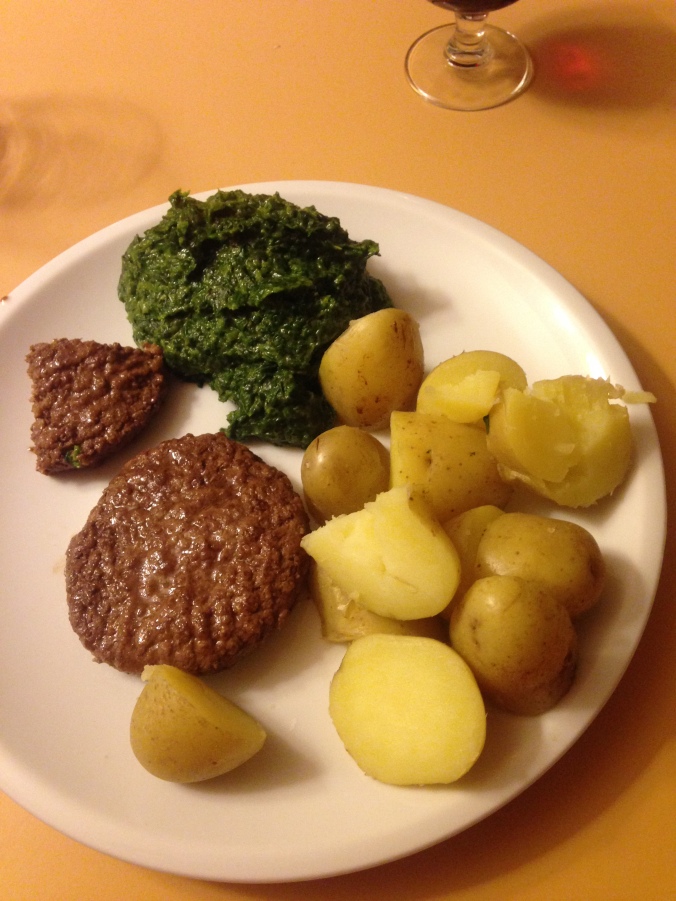 Obviously, in a chalet or a hotel or going out to eat, you’ve just got to be conscious – there will be multiple courses and free-flowing wine…so just make a judgement call. Relax a bit, ski harder tomorrow, eat less cake beforehand – it’s all about getting the balance right and come on, who can turn down onion soup and FONDUE. Just maybe turn down the cheese course that evening. 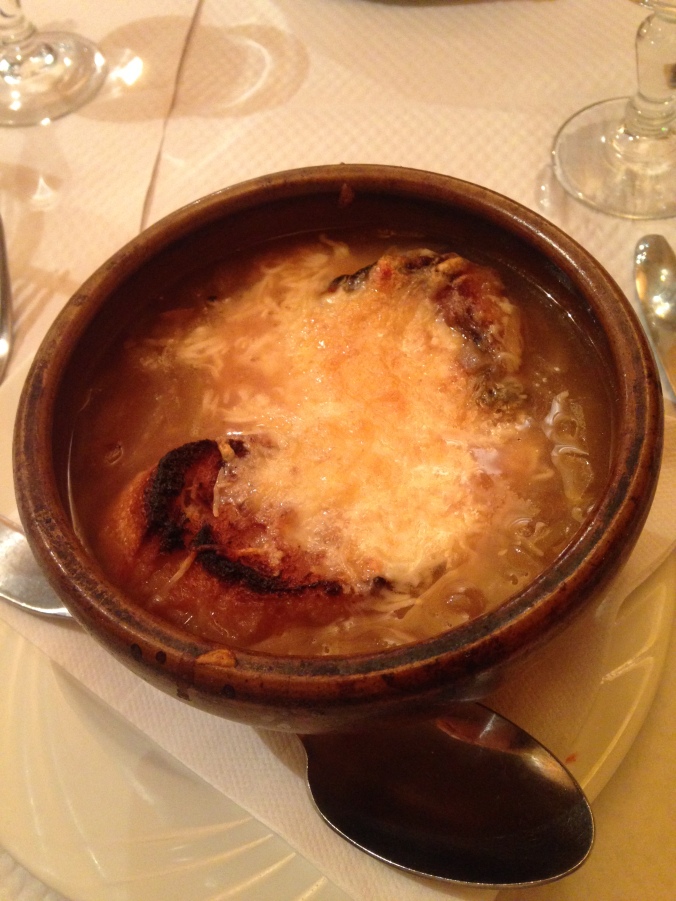 Yes, there will probably be alcohol involved. It’s hard to turn it down. However, getting up and out in the fresh air is the best recovery you could have. Also, as you are skiing you can go out in comfy snow boots and that basically means you can dance FOREVER which is really great exercise and stops you getting too drunk. So jump around, enjoy the cheesy europop and lose your inhibitions! I’m not a massive advocate of drinking heavily whilst skiing because it’s such a risk to take – not just to yourself but to those around you – so I would advise saving it until you don’t have to navigate your way down a blue run, but sometimes there is nothing better than a cold beer in the sun! (less fun is the Wednesday after tequila Tuesday….) 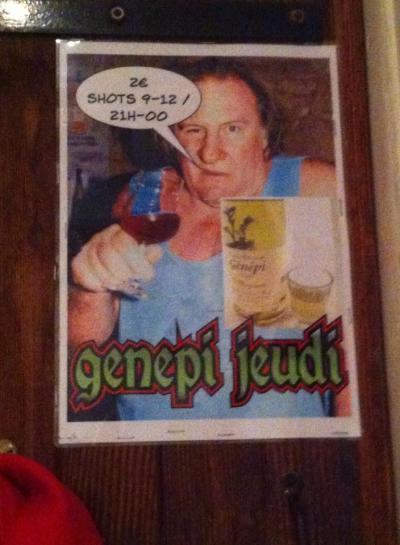 So my key takeaways are 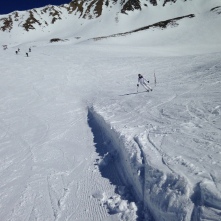