Are you dangerously addicted….or just dedicated?

A poignant question. And one I’m going to try and be open with.As much as I can. I’ve flitted either side of the line for years. I probably always will. When you’re on the more harmful side, you’ll try to kid yourself you’re on the other. And it’s not an easy decision to make. Exercise addiction isn’t on the DSM-V. Exercise is frequently prescribed as a coping mechanism for recovering from other mental disorders. Exercise is always good for you…right?

DISCLAIMER: I’m not a psychiatrist or psychologist nor any way trained in this field. This is a combination of my thoughts, discussions and general knowledge of the topic. Please, if something I cover resonates with you, talk to someone.

Turning down social invites because of training, pushing yourself to go when you don’t want to, structuring your diet for health and performance and feeling stressed out if you can’t exercise – all signs of exercise addiction. But also, behaviours clearly shown by elite athletes, trainers and those who are dedicated to improving their performance and keeping fit and healthy.

This bra from DBA Sports  sums it up pretty well. Obsessed is a word the lazy use to describe the dedicated. A talent, a skill, a hobby….it all takes time and commitment. 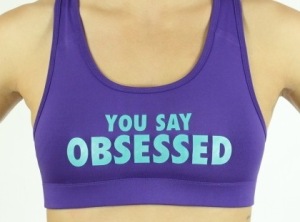 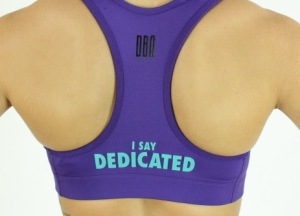 I love being active. I don’t drag myself to the gym or for a run because I have to, I genuinely enjoy it. OK, there are days when I do drag myself, but I would say that 90% of the time I am having a fabulous time, and once I’m there I feel better for it – it is said that the hardest part of a run is getting out of the door.

The majority of people who follow and stick to a training plan will have aspects of type A personalities – they like to be organised, have structure and don’t want to deviate. This is totally me. I love to plan. I hate having things thrown at me when I’m not expecting them. I want to improve. I want to reach my goals, I want to surpass them – and that isn’t something I’m going to get by chucking my training plan out the window as soon as someone suggests after work drinks. And there are things I’m willing to sacrifice to get there.

A lot of the time I’ll turn down impromptu drinks because I cycle to work and I a)need my bike the next day or can’t be bothered to cycling back a lot later (I am not promoting drunk cycling) or b)haven’t got a handbag with me and don’t want to lug my fluoro blue and yellow rucksack around when I am in normal clothes. Another example – in the summer, when the evenings are warm and light – I know a lot of people whose first thoughts are ‘amazing weather for a pub beer garden’, whereas mine are ‘amazing evening to get in a run and enjoy the outdoors’. (Although sometimes, my run may finish at the pub). I genuinely do love running, and if I didn’t like it, I wouldn’t be doing it. And I think that plants me on the right side of the line. Slogging your guts away for something you don’t enjoy at all is on the wrong side of the line. Yes, I do partially use exercise as a way of controlling my weight, but that’s because I LOVE food and my whole family loves food….and it makes me feel a smidgen less guilty…but that is far from the main reason I do it.

I’ve struggled with it and that’s hard to write – although most of my close friends will know it anyway. I went through a point where I would only eat what I wanted to eat, didn’t like my housemates cooking for me and never wanted to go out for dinner for fear of deviating from my plan….but hell, that put me in the best shape I’ve ever been in, I smashed all my PBs (some of them still standing…ugh) and I felt pretty amazing. And I was still going out in the evenings, working and getting a decent degree. But, breezing on, I feel I’m on sort of an even keel right now, as best as I can be whilst battling with the corporate world, I’m vaguely happy with my running, my weight is mneh (I’ve realised that where I am is sort of about where I seem to settle at so nothing drastic needs to be done until my clothes stop fitting me) and I am LOVING having regular club workouts in my diary as a chance to catch up with my new ‘running friends’ because they get it.

But I’ve been down the other side on multiple occasions and I seem to bounce back alright – I’ve been at the stress fracture point, it wasn’t pretty and it was partially (OK quite a lot) to do with too much running and not enough rest. For me and my body. I’m jealous of people who can bash out miles and miles without getting injured, but I’ve come to realise that it doesn’t work for me. I’m less likely (ish) to ignore niggles that are more than just niggles now than I was previously. Unfortunately, a couple of my PBs are now a few years old and I seem to have spent the past 2 years either being injured or easing back into it. And I hate that. But I’m 25, I’ve hopefully got YEARS of running ahead and plenty of time to crush them.

So, where do we draw the line?

And again, if we go back to the points I made previously, a lot of this is consistent with people who take their training pretty seriously. So I don’t think there is a hard and fast rule of thumb. Some people use exercise the way others use chocolate, drugs and alcohol – to give them a buzz, make them feel happier. The dopamine reward system functions in the same way, providing positive reinforcement. Surely it’s better to get this from exercise?

It becomes an issue when it really does begin to take over your life. Yes, I miss some social events, but I don’t miss all of them.  The amount needed is another sign.   Addictive personalities typically crave more and more of the behaviour to get the same rush – but could you claim that as you train and become fitter, you need to push yourself further and harder to see improvements?  Yes, I do double up a few days a week, but I typically choose complementary activities – an easy swim and a track session, yoga and spin, a shakeout run and a weights session – and when I get into the swing of tri training that’s going to shift again. And part of that is because I don’t want to just ‘survive’. I got a decent time with my first marathon, I want a decent time with my first tri. I’m an overachiever. And that’s going to take work.

It’s recognising when it’s stopping improving your life – and when it’s detrimental – when your exercise is causing arguments, impacting work, causing you injuries, losing you friends. It should never get to that point. What starts as a structured training plan can, as with eating disorders, become the crutch, the sense of control that you need and can’t relinquish. And it takes a strong person to realise that and reach out for support. So, as with everything, keep an eye out on yourself and your friends and family. Look at what is normal for them, not the general population. Because if we judged excessive exercise by the general population, anyone training for anything would be counted as addicted.

So there you go. A few thoughts on the matter from myself. And I’m sorry if it seems a bit disjointed (read: brain dump) and not particularly conclusive, but it’s been a tough one to tackle. And I feel I’ve got something out of it.

7 thoughts on “Exercise Addiction vs Dedication…..Drawing the Fine Line”