My answer now to the question ‘have you done a triathlon?’ can now officially change from ‘no because I hate swimming’ to ‘yes, I still hate swimming but the fun of the rest of it made it alright really’ . And by alright I mean quite fun. And by quite fun I mean I will probably do another one…

I picked Thames Turbo on the sole reason that my club was running a novice programme where this was the end goal.I also had several glasses of wine when I agreed to it. If I am honest, I basically ignored most of the training sessions and made up my own thing because a) marathon training took up a vast proportion of my time and b) I moved back home at the start of April and away from club sessions. Oh and c) I really don’t enjoy swimming in case you didn’t know that already.

Basically, there was a bit of googling and some laid back assumptions that I would get by. Actually, my training was pretty much useless if you want to think about dedicated triathlon training. I think I swam about once a fortnight on average and I just relied on my base running and cycling to get me by. I went to about one spin class and heavily relied on the fact that my commuting and every-other-weekend (ish) cycle legs would get me through (except for the fact that I stopped cycle commuting about 6 weeks ago). Oh and my first ‘proper’ brick in this block was two days before the race where I did a hilly parkrun and bashed around some Chiltern Hills for fun. I did no transition practice (but having done duathlons, not completely blind to it) and tested out my tri top on race day.

So, a potential disaster I hear you say?

(If you can’t be bothered to read all of this, it was fine, I did a 1:16:41 and ended up second in my age group, however, if you want the details of either how the hell this happened, or how to survive your first triathlon, please continue on)

I basically went to bed at 9.30 after reading 17 articles called ‘what not to forget for a triathlon’ and at 12 was still awake thinking about how to swim. And if I would drown. And if it mattered if I had to do breaststroke. Then calculating that I had 4 and a half hours before I had to get up. Then wondering how tired I would actually be if I didn’t actually sleep at all. Then SOMEONE WAS PLAYING MUSIC REALLY LOUDLY (because normal people do this kind of thing on a bank holiday rather than getting up at 4.30am)

I finally slept and about 2 seconds later my alarm went off – I bounded (…) out of bed with excitement and went to have some breakfast. My poor father did actually stand by his decision to come with me – I told him not to bother but he insisted…however did question his thinking as he sank a few cups of coffee before getting in the car.  Driving to Hampton was rapid – obviously not much traffic (normal people being in bed as expected)- and we were there at 5.45.

Registration was very easy, no queues and I then faffed a bit with helmet stickers and race belts before going into transition and racking up. I had remembered my brightly coloured towel and made a mental note of where I was (following point #1 on every single triathlon article I read online) In answer to one of my 10 questions I have for people who actually know things about triathlon, I french-plaited my hair. I took so long doing it I ended up with DOMS in my arms.

I was number 223 which meant a LONG wait of watching people in the pool. Although it did actually help because other people swam/drowned like me! However, I’m definitely glad it was a nice morning and not too cold/rainy as that definitely would have had a big impact on my enthusiasm. I think I said ‘I don’t want to do this anymore’ about 7 times.

Unfortunately, I did actually eventually have to get in. It’s a simple 3,2,1 GO and then well, you go. I let someone overtake during the swim but then kept a fairly steady pace with him after that – my form kind of went to pot and I forgot most technique things but oh well (NB never get your father to video you swimming and then laugh at you when you half drown)

The best feeling was the end, followed by the second best feeling of reaching halfway. I think I did a couple of strokes of breastroke and there was definitely some head out of the water swimming, but let’s also consider the fact I only swam a full 400m ‘TT’ once in training (and by that, I mean I approximately timed it using the clock on the wall and that I did actually stop from time to time to breathe) Moral of story = go swimming Katie. 9.53 for the swim and ‘getting out of pool and running to transition entry’ 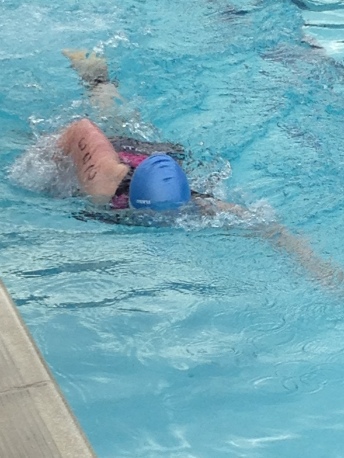 Into T1 – it was a slow one (1.30) but I kept having to think through what I was doing (remember triathlon articles) Shoved on my Chasers top and was brave and avoided the gloves. Although didn’t skimp on socks because I am not that hardcore yet…Best bit was when I realised NO MORE SWIMMING.

Out on the bike and away – immediately passed a few people on the spin to the Hampton Court roundabout, and continued to do so along the route and I am happy to say that ONLY 4 PEOPLE PASSED ME. The first was after 6 miles (he had tri bars and a nice bike), and I was then passed by a couple with disk wheels during the latter part of the return journey and then outsprinted in the last 10m by someone with a nice set of carbon clinchers. So I’ll take that. I will DEFINITELY take that. Didn’t get stuck at the traffic lights, win.

Also making me really think even more about the Giant Envie Advanced and how nice it would be to own it….and bikey seems to get a bit rattley when it’s being hammered down the road. 42.19 on the bike. I was aiming for sub 45 so happy happy. I gave myself a bit of a talking to during the (“just smash it out”) and did a bit of happy dancing that I had survived the swimming. Note to self, practise cornering and do not get stuck behind a bin lorry. Didn’t even really notice I had wet feet. It’s nice and flat so you can easily push it…plus you have ‘The Dead Zone’ coming up.

The dead zone is a weird place. You have up to 7 minutes to get back to transition from a big junction/pedestrian crossing/safety perspective. I didn’t really know how fast to cycle…pootled a bit, waved at my dad, got off, walked across the crossing and back into the pool. Relief that I hadn’t had a puncture. Had a wave at some Chasers who had finished and then into T2. Was in for 57 seconds. Not entirely sure what I was doing anyway, but then headed out on the run.

The run is nice and easy smash it through Bushy Park. You run along the road for a short while and then head in. I kept looking down at Garmy who was telling me 6:58 pace which was VERY odd (by odd, mean weirdly fast and comfortable) First mile in 7:03.

Second mile in 7:03. The first lap goes to the left and the second forks off to the right. Was overtaken by some tall guys with long legs so I let them pass (I say ‘let’ as if I could have kept up) Waved again on the return and YES FINALLY it was my turn to go right at the junction. Final mile in 7.04 (actually very impressed here with my consistency!)

And well, then it was over. Turn a corner, see a ‘100m sign to go’, dodge a labrador (no closed paths here folks) and hammer it home! Run 22:02. (I’m actually only a couple of seconds off my 5k PB here and I did at one point think I might break it. This means I need to go and get a better 5k PB…)

Basically, the bits I really didn’t practice i.e. swimming and transitions, were not great. The bits where I hoped my general fitness and post-marathon training legs would sort me out, they did.

I have gone from moaning yesterday to being annoyed at myself for not being able to shave a minute off somewhere (i.e. if I had actually gone swimming, I might have won an AG prize. LOL. I’m as shocked as you are at that)

And recovery? Had a few jelly babies and then made banana-oat pancakes with blueberries and chocolate chips. Except they weren’t really pancakes, more like mush that I really hope doesn’t give me salmonella. I had very cleverly booked in a sports massage for 12.45 which was FABULOUS. Very bizarre to be at home at 11 and wondering why you are so tired – oh yeah, that will be the 7 hours I’ve already been awake for.

So what have I learnt from this triathlon?

One, quit moaning and stop being a grumpy, pessimistic mneh of a person. Two, actually go swimming. Three….that I didn’t completely hate it? I actually enjoyed the bike and run so much that I could maybe put up with the swimming (but during the swimming all I could think was about how much I wanted to be on the bike) So decided that if I want to take it seriously then I can get the Envie and a 920XT because OBVIOUSLY I need to be able to time the different parts better and use a watch whilst swimming. Four, er maybe actually following a training plan would help Katie.

All in all – give Thames Turbo a bash.It was a great race, marshalls were super smiley (they were looking up everyone’s names as you went past) and it all ran very smoothly. I have now ticked off one of my 2015 goals!

Oh, and I have just received an email saying I was the fastest female novice!  (More shock)