OK, so I promised last Sunday evening that I would document what I was eating this week as an attempt to vaguely undo any cheese-and-wine-and-beer-and-all-the-food related damage from a week in Chamonix. However, as I mentioned during the week, this is kind of a necessity when skiing because a) I ski hard and b) I am not working a season and doing this every week for 5 months and c) HOLIDAY EXERCISE = CALORIES DON’T COUNT

However, I am conscious that I’ve been a bit lax recently even before skiing because I’ve been injured, work has involved a lot of late nights and takeaway sushi, I’ve got to move out of my flat so there has been some mega stress there, far too many nights out recently……but these are pretty pants excuses so I have decided that I need to get a bit of a handle on things for a while as there is a difference between intuitive eating and ‘throwing all your toys out of the pram because sod it, I can do what I like and surely that’s better than obsessing over everything I eat’

Also apologies for all my pants iPhone photography.

Ah Monday. Cue back to work blues and too many emails.

Breakfast was a post-leg session strawberries and blueberries combo with Greek yoghurt (full fat obviously). I wanted to use my mini Rowse honey sample but I totes forgot and left it on my bedside table (i.e. the normal place to keep honey) so I just had it plain. Note here that I did legs at the gym (WHY WHY WHY would you do this after a week of heavy skiing) and struggled to walk up the stairs to get out. 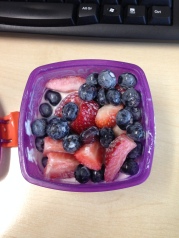 Lunch I made last night (#foodprep) and was a grilled chicken, avocado, feta, quinoa and broccoli salad with my fave rapeseed oil honey and mustard dressing. I ate this whilst taking notes during a meeting. Then I had an apple. And then I had a 9bar at around 4. 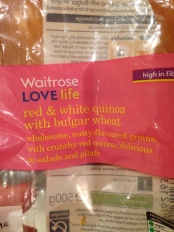 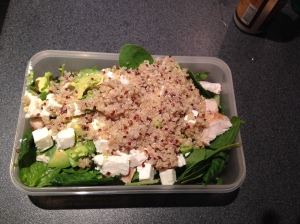 Met a friend for dinner. It went a bit downhill – but on the plus side it was more liquid than food? Went to Bravas at St Katharine Docks – the aioli for the patatas bravas was literally to die for – also had a morcilla slider, a little bit of octopus, and some bread with tomato & olive oil. And a piece of manchego. However, I also did have two rather large glasses of tempranillo (maybe 2 and a half….3) and a G&T but just about resisted the snacking urge when I got back – had a Maxifuel sculptress bar (clearly better than toast?!) and a high5 electrolyte drink (this is such a weird combo for being slightly tipsy)

Nearly had to take a last minute flight to Hong Kong for work  but luckily I didn’t. Apple + sculptress bar mid-afternoon and a REALLY MASSIVE BOTTLE (750ml protein shaker) of squash. I really like squash. My manager bought me cake to save orphans and this made me feel bad about not eating it….but I didn’t! Office snack peer pressure is the worst…

Then I pootled home on the bike and went for a little run to take a gamble on my Achilles. 2.5m, felt SO SLOW at 8.26s, literally it felt like I was running sub 7s. But leg didn’t fall off so all good. For dinner I made chickpea and chorizo stew (I have a feeling it’s based on a Nigella or Delia recipe but I’m not really sure) It involves onion, chickpeas, chorizo (see the originality of the name?), tinned tomatoes and whatever spices I thrown in (lots of ras el hanout normally). Accompanied by my fave wild and red camargue rice. Whilst making it I had 7 dates and 2 slices of chorizo. I wanted Nesquik for quick recovery but there wasn’t enough milk waaaa.

Guess what I had for breakfast? Taadaaaaa. 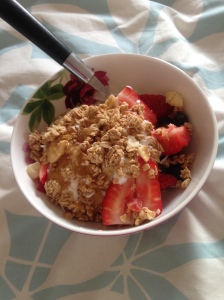 I worked from home as my team are off gallivanting and it meant I could get more done. It also meant I could nip out for a lunchtime run (4.66m @ 8.11 pace if you believe Garms, 4.9 and 7.54 if you believe Strava) around Clapham Common when it was SUNNY and there were daffodils and everything.

I reheated the chickpea and chorizo stew and had it with wholewheat couscous and spinach. Also had 6.5 dates (one was really small) whilst waiting because I was hungry. Handful of dried apricots and some more dates as a little snack. Dinner was turkey breast steaks marinated in ginger, sweet chilli sauce, soy and garlic, with a chickpea side salad and some spinach. And squash. And then a protein shake before bed. 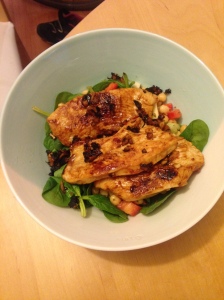 I went swimming! I tried out my new snazzy goggles. Realise I struggled quite a lot with the 3 stroke breathing thing. Did a few made up drills. Broke the mould and make banana-egg-oat pancakes (with greek yoghurt, raspberries and agave) for breakfast as worked from home again. 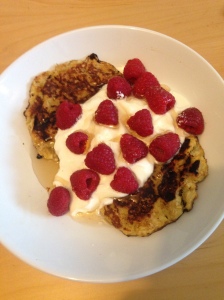 Lunch was a chicken-feta-avocado-you-know-where-this-is-going-so-I’ll-shut-up. Then I had an apple and some Nesquik because recovery. Had to go into the city for an afternoon event (I had 3 chocolate mini rolls which is fairly conservative given the options) then a rugby club event. UH OH (I am sure we all guess where this is going) There was ALL THE WINE (I mean I didn’t bother counting but also prosecco) Also 2 mini spring rolls and some pita and hummus and then I had a pita bread when I got home. But Kate and I looked lovely so it’s all fine and we’re discounting the fact we ended up in a bar that is known for being a MASSIVE dive. 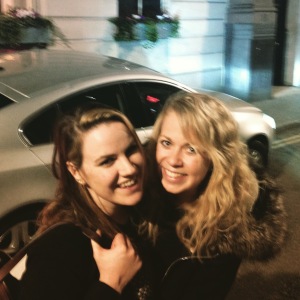 Decided cycling was the best thing, then had a bagel with butter (as I still have 2 weeks left until the PB is coming back into my life) at the office. Lunch was going to be the same again but we then had an impromptu late lunch and decided the best thing when you have had all the wine is to then have more wine at lunchtime.

……so I had 2 glasses, 3 small pieces of bread, split a chateaubriand (rare, obviously) with bearnaise, lots baby carrots and chips. YUM. Then I had a skinny hot chocolate mid afternoon AND a Fanta AND a piece of caramel shortbread because today has clearly become my cheat day.Although note that I had Fanta when the wine and beers were brought out in the office and I’d like to think I did pick the better option.Then I cycled home and I had my planned lunch (guess what it was….chicken salad) and some apricots (and squash) for dinner and fell asleep.

I SLEPT FOR 10.5 HOURS IT WAS INCREDIBLE. Went for a run – 9.15m @8.22 pace but my calves are super super tight so then rolled watching Saturday kitchen and had banana-oat-pancakes (yes, with greek yog, raspberries and agave). Then went to the pub for an all-afternoon rugby watching session and there was 4 pints of cider and therefore a few chips eaten….I then came home, had A PIZZA (!) and then went out again. Had a gin and slimline, two vodka lime and sodas but there were ALSO 2 shots of tequila and a jaegerbomb involved. Danced A LOT.

Woke up, had a banana. Long run time! Yeah this was vile as expected, as some of you might have seen on Twitter. I I had one Powerbar gel after about 6 miles but it made me feel sick (it was one I should have had water with…) I then had to stop to buy water partway through (normally I don’t run with it – I can see you rolling your eyes – but this time I REALLY needed to) and I had a bit of a wobble around the 13/14 marker and I thought I was going to full on vom (soz) at the end when I stopped so had to lie on the grass on Richmond Green. 18 miles @8.36. Full on mentally and physically draining.

Went to Waitrose and then got an Uber home because rail replacement buses (! and I wonder why my credit card bill is 60% Uber….and 40% Waitrose….)Inhaled a bottle of freshly squeezed orange juice on the way home (sorry mr Uber man for having to deal with a sweaty exhausted runner), then had a hot cross bun with butter and probably half a packet of Haribo Supermix. Felt REALLY cold so got into bed with heating and dressing gown on writing this post. Basically this is entirely self inflicted and if I cut down on binge drinking (I am basically the epitome of the dictionary definition) it would have probably been OK. I then had some chocolate milk and some grapes and I have drunk A TON of water (some with squash)

Dinner was prawn stir fry with chili and ginger straight-to-wok noodles, lots of veg and a rendang sauce.

(Just FYI, there are now no Haribo left)

So this was a big week from a drinking perspective and er yeah I’m working on that. I didn’t really do my healthy week as healthily as I wanted and this is 99% alcohol-related. And I don’t need a lecture or sneaky side eye about this. The problem is that this is an easy trap to fall into, especially in the industry I’m in and unfortunately (!) with the friends I have (I jest, I love you all dearly) and I don’t even want to take a guess at the number of liquid calories that have been involved this week, nor the crappy eating (chips AND pizza in one day?!)

I’m an awful weekday healthy eater and weekend mentalist and this has very much proved it as Thursday kickstarted a downward spiral.

Miss O’Connor…..I challenge you to repeat this task. Off you go (and you have to mention all the bread)